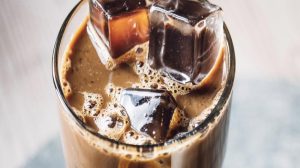 Iced coffee and cold brew have been on a success trajectory lately. Traditional iced coffee has experienced a growth rate of 33% on menus since 2007, according to Datassential, with a big bump in interest in recent years due to the introduction of cold brew. In fact, cold brew is surging in demand, with younger generations and higher income brackets driving an overall consumption uptick of 30% in the 12 months ended February 2018. Can you say “big opportunity”?

Cold Brew is unlike any other type of coffee. Cold Brew is crafted, made by slowly steeping ground coffee beans in room temperature water for more than 10 hours and then filtering them to produce a coffee concentrate. That concentrate is diluted with cold water and served chilled over ice.

Steeped for many hours at room temperature, Cold Brew is created entirely without added heat. This slow, gentle process draws out the best of the beans, delivering a smooth end-cup with rich, clean coffee flavor and none of the bitterness and acidity of hot brewed coffees — a flavor profile particularly attractive to younger consumers.

Datassential pegs the four-year growth of cold brew at a whopping 424.5% (44% in the last year alone), and is a favorite of the all-important millennial customer base. Despite this impressive growth, however, the beverage still only appears on less than 4% of menus.

Clearly, getting iced coffee and cold brew on the menu are good places to start, but there are other tactics for boosting these beverages’ appeal and maximizing their potential selling price.

Step Up the Condiments

Given that many customers sweeten and/or lighten their iced coffee and cold brew, it pays to offer them an opportunity to customize these beverages while they’re at it. In addition to the usual cream or milk, and sugar, consider:

Since iced and cold brew coffee are still underrepresented on menus, it’s relatively easy to create signature versions of these beverages that will set your operation apart and set the stage for premium pricing.

After regular brewed, iced coffee is the leading coffee beverage. Falling just outside of the top 10 in daily incidence rate, iced coffee performs better than common drinks like lemonade, wine/spirits, and smoothies.

Consumers view cold brew as a treat. They grab one when they want to indulge or have something different from the norm. In that way it’s differentiated from hot brewed coffee, which is part of consumers’ daily routines. As such, consumers are likely to have both beverages, but for different occasions.

It may be necessary to educate consumers on the difference between cold brew and iced coffee. The majority of those that haven’t tried cold brew fail to understand what makes it different from iced coffee. From a brewing and/or flavor perspective. Pairing education with sampling could help entice more consumers to try the product.